LOS ANGELES, Aug. 16, 2022 /PRNewswire/ -- Herbalife Nutrition and the LA Galaxy have agreed to a multi-year renewal of their partnership, which began in 2005 as the club's official nutrition partner. Herbalife Nutrition will continue as the official presenting and jersey sponsor of the club – a designation that began in 2007 and is the longest-running in Major League Soccer (MLS) history. 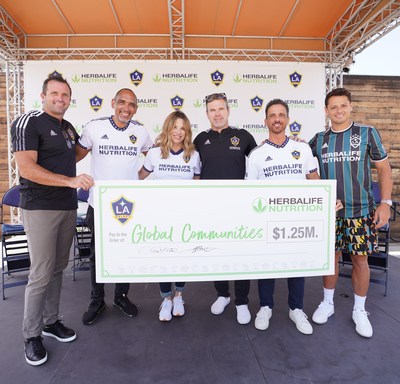 "We are excited to extend our 17-year partnership with the LA Galaxy."

Beginning with the 2023 MLS season, Herbalife Nutrition will continue as the LA Galaxy's exclusive nutrition partner, the club's exclusive health and wellness partner, and the official nutrition lifestyle partner. Additionally, Proactive Fueled by Herbalife Nutrition, an elite state-of-the-art performance facility, located in Westlake Village, CA, will be available to the team for preseason training and sports performance testing at the facility.  As part of the sponsorship, the Los Angeles Galaxy Foundation and the Herbalife Nutrition Foundation are also committing $1.25 million to support charitable efforts to benefit vulnerable and underserved children around the world, which to date has resulted in $2.5 million to global communities in need.

"We are excited to extend our 17-year partnership with the LA Galaxy and expand it to include new areas of collaboration that will benefit our independent distributors, LA Galaxy players, fans and communities worldwide" said Frank Lamberti, regional president of the Americas for Herbalife Nutrition. "We are also proud to announce that we signed a deal to be the exclusive nutrition partner for LA Galaxy's defender Julián Araujo."

Furthering the company's commitment to nourishing the potential of athletes, Herbalife Nutrition also signed an exclusive multi-year sponsorship deal with Galaxy defender Julián Araujo, who will utilize the Herbalife24® line of sports performance products, which are *NSF Certified for Sport®, to nourish his performance, on and off-the-field. Julian's sponsorship includes sports nutrition education appearances in the United States and sports nutrition education through the company's social platforms.

"We are thrilled to extend our partnership with Herbalife Nutrition on and off the field and are excited that Julian will join us as we continue to work to improve the communities not only in hour hometown, but worldwide," said LA Galaxy President, Chris Klein.

As part of the Joint Community Partnership program between the LA Galaxy Foundation and Herbalife Nutrition Foundation, which aims to improve the lives of children living in the underserved communities, Araujo will bring a new mini-pitch, a scaled-down soccer field, to a park in Los Angeles, Calif.

"Through this partnership, I'm able to share my passion with my community by giving kids access to a safe place to play soccer while also encouraging them to be fit and active," Araujo said.

A native of Lompoc, Calif., Araujo has tallied six assists in 23 games played (21 starts) during the LA Galaxy's 2022 MLS campaign. In four seasons with LA since signing from the club's Academy in 2019, Araujo has registered one goal and 17 assists in 90 regular-season appearances (80 starts) for the Galaxy. At the international level, Araujo has made three appearances (2 starts) for the Mexican National Team since making his debut on Dec. 8, 2021. Araujo attended Lompoc High School, leading his team to the CIF Southern Section Division 4 playoffs during the 2016/17 season. Araujo received the Mayor's Community Athlete of the Year Award from the LA Sports Council at the 17th Annual LA Sports Awards for his outstanding work in the community in March 2022 and was also named the 2021 LA Galaxy Humanitarian of the Year last season.

Herbalife Nutrition is a global nutrition company that has been changing people's lives with great nutrition products and a business opportunity for its independent distributors since 1980. The Company offers science-backed products to consumers in 95 markets by entrepreneurial distributors who provide one-on-one coaching and a supportive community that inspires their customers to embrace a healthier, more active lifestyle. Through the Company's commitment to nourish people, communities and our planet, Herbalife Nutrition pledges to achieve 50 million positive impacts – tangible acts of good – by 2030, its 50th anniversary. For more information, please visit IAmHerbalifeNutrition.com and follow on Twitter @Herbalife.

About the LA GALAXY

*Certified for Sport® is a registered trademark of NSF International.